Ruby is web application framework whose source code is published and made available to the public released in 2004. With every passing year it got finer and better with newer versions, the latest Rails 3 version was released on Jan 2012 with a routing engine and faster development mode with tagged logging and automatic query explain. It deploys out of box, customized and beautiful applications by gathering information from the web server, interacting with databases and rendering flawless templates. This frame work has templates which generates skeleton framework along with custom gems and configurations. 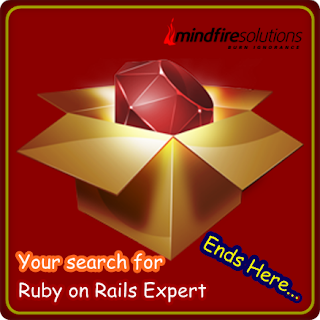 It has certain tools which help the programmers develop apps with easily and in quicker time. It has a leaner code base, robust modular design and availability of existing plugins which reduces the need to build features. Modifications to the sites can be made easy by keeping in mind certain factors like improved performance, scalability and high quality solutions. Rails is an ideal way to realize and build database solutions at a fraction of the usual time and expense, manages content management really well. Many social networking and membership sites built on Ruby on Rails (RoR or Rails) caters to their users’ diversified needs and solutions and delivers best web based applications. The modular approach to site development e-commerce sites benefit tremendously from Rails user-friendly features. It supports bulk uploads and updates, photo resizing/cropping on the fly, custom pricing algorithms etc.

Rack is a tool which lays out adaptable interface for developing web applications. It wraps up HTTP requests and responses, distills and unifies API for web servers, web frameworks and software in between. It is used as a RubyGem. It supports Ruby and Ruby Frameworks. It has total downloads 24711102 and increasing at a rate which averages 8% per month. It is different from other frameworks as it is powerful, concise and has elegant code base.

Sinatra is an alternative tool to Ruby web application frameworks such as Ruby on Rails, Merb, Nitro, Camping and Rango. It is dependent on the Rack web server interface. It helps in deploying web apps at quicker time. It was released 5 years ago with total downloads as 6765058 and increased by 22% last month.

Padrino is another web application framework, open sourced in 2010, its an extension of Sinatra and depends on Rack as web interface. This framework was created in order to extend Sinatra to more easily support rich web applications.

Cramp is another asynchronous tool primarily designed for working with larger number of open connections and providing full-duplex bi-directional communication. It builds realtime applications and handles many open connections simultaneously.

Merb was merged into Rails web framework having Model, View, and Controller architecture. Most of its functionality is based on plugins and it is widely said as the pocket rocket web framework.

Espresso scalable framework aims for speed and simplicity. And we have Hobo, Cuba which is a micro-framework for web applications. And Camping is minature rails for people at homes. Ramaze is a simple and modular web framework and Renee is a super-friendly web framework.

There is also ultralightweight, ultracustomizable, ultracool web framework called Rango which is inspired by Django. Scorched, a lightweight Sinatra-inspired web framework for web sites and applications of any size.

Many of the companies uses Ruby in some aspects be it BBC, Cisco, Amazon, CNET, IBM, JP Morgan, NASA and even Yahoo. Many of the fastest-growing web-based companies have been built using Ruby on Rails: Scribd.com deals with 70 million readers each month, Groupon has 38.5 million subscribers in North America. Similarly Basecamp deals with millions of users worldwide. All in all, more than 200,000 web sites are using Ruby on Rails. This speaks volumes about why businesses are betting on Ruby on Rails development.

We have the best Rails development team in India which caters to needs of clients from various industry verticals like educational institutes, schools, colleges, stock brokers, govt. organizations, emergency services, travel agencies, societies, restaurants, hotels, small, medium & large enterprises across all the globe. Ruby on Rails is the best choice for the successful companies who benefit from the speed and agility of building applications. It builds productive websites which enhances company's growth.